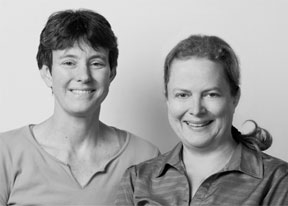 Karen Lewis is the director and animator of Wings of the Sea, having worked on projects for the Seattle Art Museum, King County, KCTS public TV, and the Point Defiance Zoo and Aquarium. She lives in Seattle with her family, and is the illustrator of several books. See more of her work at karenlewis.com

Playwright Elizabeth Heffron is the writer for all the Wings of the Sea projects. Her play, Bo-Nita, received a 2013 Edgerton New Play Award and its world premiere at the Seattle Repertory Theatre in October 2013. It was also produced at Portland Center Stage in February 2014; where it had been developed for the JAW Festival of New Plays. Her most recent new work, Portugal, has been developed as part of the Hedgebrook Women Playwrights Festival, through the Seattle Rep Writers Group, and with ACT Theatre. Her play, The Weatherman Project (co-written with Kit Bakke), received a workshop reading, as part of the Seattle Repertory Theatre’s inaugural New Play Festival in February 2013. Other full-length plays include New Patagonia, produced by Seattle Repertory Theatre, and Mitzi’s Abortion: A Saint’s Guide to Late-Term Politics and Medicine in America, which received a world premiere production at ACT Theatre in 2006. Since then, the play has been produced across the country, published by Original Works Publishing, and the Rain City anthology ‘MANIFESTO v.3: Here’s to a Theater of Defiance’, edited by Naomi Iizuka. She currently teaches at Cornish College of the Arts, ACT Young Playwrights Program, and at Freehold Theatre/Lab, where she spent 5 years working with the women of the Washington Correctional Center for Women on inmate-generated performance pieces. She is an alumna of the Seattle Rep Writers Group, a member of the Sandbox Artists Collective, and the Dramatists Guild. She holds an M.F.A. in Playwriting from Hollins University, and a B.S. in Psychobiology from UCLA. You can view her website for more information.

Rachel Price is the creator and producer of Wings of the Sea, a project she began working on while volunteering at the Seattle Aquarium. She completed an M.A. in Moving Image Archive Studies from UCLA in 2009 and, since 2010, has been the publisher of the online publication Moving Image Archive News. In 2014, she helped form Moving Image Preservation of Puget Sound, a collaborative archival video digitization project in partnership with Seattle Municipal Archives, King County Archives and University of Washington.