The most well-known alcids are the puffins, understandably so with their striking bills and head ornamentation during the breeding season. The alcid species Rhinoceros Auklet, sometimes called the Rhinoceros Puffin, is featured in our first short: Birdathlon, where you’ll learn about alcids’ remarkable ability to dive deep and “fly” underwater.

Our rhino auklet competes against a swift arctic tern. Announcers Ted Pelican and Tom Gull will tell you all about it. 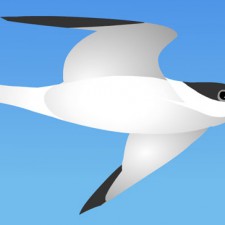 Who will win a race that involves both air and sea?  Find out when our intrepid Rhinoceros Auklet is pitted against an Arctic Tern in an Olympic-caliber spoof that demonstrates the unique physiology and biology of the Alcid species. 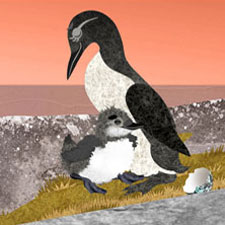 Legend of the Great Auk

In Production: An illustrated story evoking the feeling of a Native American legend, teaching viewers about the history of an extinct Alcid, and identifying the hazards facing these birds in the past, present and future. 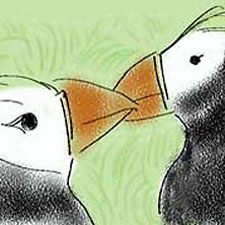 In Production: An abstract, musical look at the nesting and breeding habits of a variety of Alcids. Fantasia meets Nova in this intimate look into life in an active Alcid colony. Features specific behaviors of four species of Alcid: Common Murre, Pigeon Guillemot, Ancient Murrelet and Tufted Puffin. 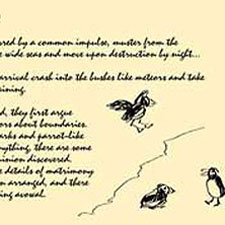 In Production: Five short segments narrating actual journal entries from biologists’ field observations of Alcid colonies, including entries from William Leon Dawson and other noted naturalists from the past and present.