Welcome to the new Wings of the Sea website! The reception for first animated short Birdathlon kept us unexpectedly and pleasantly busy in 2011 and 2012. In addition to being featured at a few great festivals and the Aquarium of the Bay in San Francisco, it was pretty fun to get some requests for showings in classrooms and other educational settings, including a Girl Scouts Alaska program unit on aviation – cool.

This year, armed again with a great script from Elizabeth Heffron, Karen Lewis has almost completed The Legend of the Great Auk. The animation style is different from Birdathlon. We took a trip to Daniel Smith art store in Seattle and picked out some beautiful art paper which Karen scanned and integrated into the characters and backgrounds. See the behind-the-scenes videos for a preview of the lovely results. 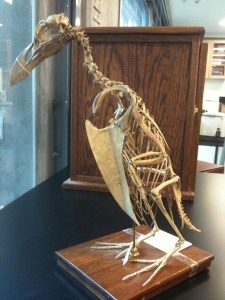 Great Auk skeleton from the California Academy of Sciences

The Great Auk was the last flightless bird of the northern hemisphere – I got a chance to see a skeleton of one at the California Academy of Sciences in San Francisco. I made an appointment with the bird and mammal collection curator, Maureen “Mo” Flannery, and was shown the cabinet where their auk skeleton was housed. Strikingly, it was kept in the same cabinet as the ivory-billed woodpecker, another extinct bird

(Here’s a little on the scant remaining hope the ivory-billed may still exist: http://www.birds.cornell.edu/ivory.) The skeleton of the Great Auk pictured here was put together from various birds. For more on the Great Auk, I recommend Jeremy Gaskell’s book Who Killed the Great Auk? And if you’re going to be in Washington D.C., you must certainly check out the exhibit Once There Were Billions; The Vanished Birds of North America, which runs through October 2015.  If you go, tell us about it.